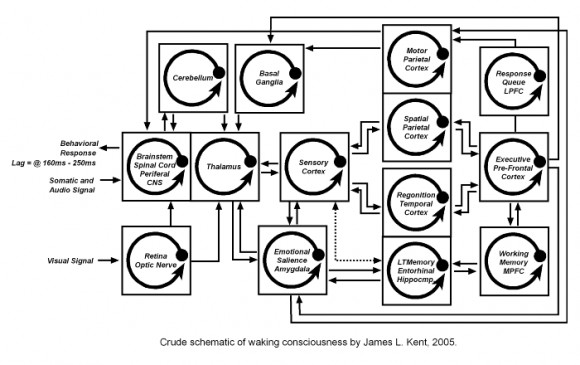 This is a simple schematic of human cognitive workflow that follows perceptual signal through the brain. Starting at the left with the two inputs (audio and visual) you can chart the flow of signal through the various processing levels until you ultimately arrive at output, or behavior, with a delay of a few hundred milliseconds.

We don't perceive anything in our conscious mind until sensation hits the Executive self in the prefrontal cortex (PFC). The lag between the time an image hits our retina and the time you actually "see" the image in your mind is about 16 milliseconds, giving you a working visual frame-rate of about 60 frames per second. Anything that registers at this speed or less is considered to be "subliminal" and does not trickle up to the Executive brain or Working Memory. Subliminal images and sounds can, however, make an imprint on memory, and can even create an emotional reaction via the amygdala, the brain's preconscious first-alert system for danger and opportunity. If you follow the schematic, you can see that the amygdala's emotional response can completely bypass any rational logic in the higher brain, but a "rational override" built into the frontal cortex can suppress the amygdala's early-warning system if the danger turns out to be viewed as less extreme than originally perceived.

Following the schematic up the line we can see how all sensation trickles into memory somehow, even if it isn't fully realized by the Executive self. However, it is the constant interplay between Executive self, Working Memory, and Long Term Memory (LTM), that creates the distinct memory structures that become who we are -- our behaviors, our personality, our paradigms, etc. And if you follow the dotted line which moves both ways between LTM and the Sensory Cortex, this represents the connective memory networks that contain symbolic information about ourselves, the connections we browse through and fuse together when we think, create, and dream.

You can follow the entire schematic all the way out to physical response, or behavior, and see that the lag time through the entire system is about 160-250 milliseconds at decent reflex speed, though this time can be overclocked with stimulants and/or repetitive training of particular reflexes. It should be noted that each one of the cognitive boxes with a circular arrow in it represents an iterative processing task, a task that may be performed once or multiple times depending on the clarity and resolution of data you are processing. Higher order processes may also request multiple lower-order processing passes via recurrent feedback, and multiple information passes means longer lag-time through the system (all thought and no action). Simple information and ambient noise tends to move faster through the system than complex symbols and words, which rely on dedicated sub-processes to properly decode into active thought (not illustrated).