Psychedelics can produce many types of hallucination, including geometric webs and grids;1 distortions of space and time;2 and photographic images of objects, people, or scenery. Hallucinations with a photographic, animated, or film-like clarity are called eidetic hallucinations, or eidetics for short. Eidetics share many of the formal qualities of dreams, visual memory, and imagination, and may be the most seductive aspect of experimenting with hallucinogens. Eidetic hallucinations rise and fall like dream snippets, rarely holding form for more than a few seconds before fading or shifting into another form. Eidetic objects, scenes, or people that become solid and retain their shape for an extended period of time are called frank or concrete hallucinations. Concrete hallucinations are often solid, immersive, indistinguishable from reality, and share many of the qualities of lucid dreaming, sleepwalking, and dementia. 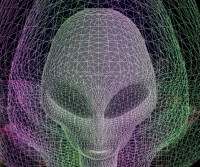 Figure 1 : Eidetic tryptamine hallucinations, like this alien, typically emerge as snapshots or animations within a larger geometric interference pattern.

The most commonly reported eidetic hallucinations seen on psychedelics are of people, faces, animals, plants, flowers, spirits, aliens, insects, and other similar archetypes. Eidetic hallucinations can sometimes take the form of entire virtual worlds, spirit dimensions, invisible landscapes, and so on. Eidetics often emerge within a pre-existing entoptic interference pattern that grows in intensity over time to produce more photographic or 3D rendered objects (Fig. 1).1 Eidetics under the influence of psychedelics are most often reported with eyes closed or while sitting motionless in meditative trance. On high doses of psychedelics eidetic hallucinations may materialize with eyes open on any surface, pattern, or texture thats gazed at for more than a few seconds.3

Figure 2 : Eidetic hallucinations can arise progressively from complex stimulus, such as a piece of concrete revealing hidden fractal patterns, faces, or a Buddha sitting lotus.

Psychedelic eidetics are progressive, which means they begin as non-durable form arising from patterns or noise, and then over a period of seconds drift, smooth, or lock into formal qualities which can be recognized as salient shapes (Fig. 2). The process of smoothing or locking onto an eidetic form in a psychedelic hallucination requires some minimal amount of focus and concentration to sustain. The eidetic image may materialize, ooze, or pulse into clarity in response to the subjects concentration and intent, developing slowly like a Polaroid photo or film-reel fade-in. Losing concentration for an instant can cause the eidetic image to fade away or shift into another image. Holding the eyes still will increase intensity of progressive eidetic imagery; flicking the eyes from side-to-side will wipe the visual memory buffer and cause eidetic images to rematerialize from scratch.4

The Hippocampus, ACh, Memory, and Dreaming 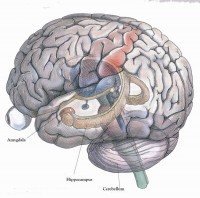 Figure 3 : The hippocampus is located in the medial-temporal lobe, and is responsible for memory compression and recall. Hippocampal activation is associated with spontaneous eidetic hallucination and dreaming.

The processes of dreaming, memory storage, and memory recall are managed by the hippocampus (Fig. 3).5 The hippocampus receives perceptual information from the frontal cortex but is also wired tightly into the emotional limbic system and medial temporal lobe; which is why strong memories always have an emotional component.6 Since the hippocampus is central in the formation, consolidation, and reconsolidation of all salient memory, we can also assume it is the source of salient eidetic hallucination. The hippocampus is most active while awake and while dreaming. The process of moving from waking to sleeping is associated with a move from high beta or alpha activity down to slower theta and delta ranges. Deep sleep is associated with slow delta waves and low energy activation, while REM sleep and dreaming begin to produce beta activity and energy profiles similar to those seen in waking activity.7

Nocturnal dream activity is a process of memory consolidation.8 In deep sleep and REM the stress chemical cortisol decreases communication between the hippocampus and neocortex,9 and the process of REM and dreaming is stimulated by acetylcholine (Fig. 4).10 Acetylcholine (ACh) is the primary messenger of the brains cholinergic system, essential to hippocampal modulation of memory compression and recall. Sleep-onset, sleeping, and dreaming are associated with an increase in ACh and cholinergic modulation of the brainstem and medial temporal lobe; this occurs along with a proportional decrease in serotonin, norepinephrine, and aminergic activity in the pre-frontal cortex (PFC). The interplay between these two systems acts like a tide between waking and sleeping worlds. Drugs which increase aminergic activity, such as antidepressants, should also decrease dreaming.11 Similarly, the prolonged suppression of cholinergic activity and REM sleep due to deprivation or amphetamine abuse creates psychotic episodes which may be defined as bursts of dream activity erupting spontaneously into waking states.

To describe the functional interplay between aminergic waking states and cholinergic dreaming states, J. Allen Hobson has proposed a three-dimensional AIM state-space model.11 The interference between aminergic and cholinergic systems can modeled by plotting the overall activation of the brain (A - high vs. low energy), the input of sensory signal (I - internal vs. external), and the signal modulation (M - aminergic vs. cholinergic). Using this AIM model we can present a snapshot of the waking, dreaming, or hallucinating brain in a graphic context (Fig. 5). A waking brain would be high in activity, input gated externally, with high aminergic modulation. A dreaming brain would also be high in activity, but input gated internally and high cholinergic modulation. Within this model states of deep sleep, mania, and psychosis can also be formally described. According to this model, eidetic hallucination in a psychedelic session will not begin until external serotonergic modulation is sufficiently interrupted to allow internally gated cholinergic activity to rise to the fore of consciousness. Remaining motionless, closing the eyes, or sitting in a quiet darkened environment will stimulate the onset of eidetic hallucinations on psychedelics;12 this is presumably because darkened stillness promotes sleep onset and an increase in internally gated cholinergic activity.

The ACh promotion of dreaming and REM has been demonstrated in animal research,10 but only subjectively reported and presumed in humans.22 Subjective reports of combining both the dissociative ketamine and the psychedelic LSD with pre-doses of galantamine and choline (both acetylcholine promoters) indicates that ACh promoters facilitate emotionally intense eidetic hallucinations, sometimes uncomfortable or unpleasant in nature, emerging beyond the subjects capacity to control.13 This demonstrates that the production of eidetic imagery in response to ACh is a spontaneous and automatic function of hippocampal memory consolidation that cannot be easily controlled by the will or intent of the subject. The spontaneous production of salient eidetic memory makes psychedelics a useful tool in psychotherapy,14 but the uncontrollable flood of eidetic imagery may not always be pleasant for the subject. States of intense eidetic hallucination may be associated with memory regression, imprinting, reconsolidation, and neuroplasticity.15

Hallucinogens which target ACh receptors are reported to produce very vivid waking dreams and concrete hallucinations. Anticholinergics cause drowsiness, but at high doses also induce a disruptive sleep and a qualitatively unique form of delirium.24 The commonly reported anticholinergic hallucinogens are the tropane deliriants atropine and scopolamine; found in deadly nightshade, belladonna, datura, jimson weed, and members of the Solanaceae family.16 Muscarine from the Amanita muscaria mushroom also interacts at the muscarine ACh receptors as an agonist. Tobacco also targets ACh receptors, but nicotinic ACh receptors instead of muscarinic receptors.17 All plants and pharmaceuticals which target the cholinergic system are reported to be hallucinogenic at high enough doses. Cholinergic hallucinations are unique in that they may erupt seamlessly into consciousness like fully formed dreams or fevered delusions.18 In contrast, tryptamine psychedelics have progressive levels of entoptic or erratic hallucination before reaching the level of concrete hallucination. Although datura and tobacco are common admixtures of traditional Amazonian ayahuasca brews, experimentation with plants and drugs that target the cholinergic system at hallucinogenic doses is physically very uncomfortable and potentially lethal.16,21

Concrete hallucinations are similar to symptoms of dementia in that the subject literally cannot tell delusion from reality. Like a sleepwalker, the subject may think they are at the supermarket when actually they are looking into a closet. Psychedelics may produce this state, but it is more commonly associated with dissociatives, deliriants, and pharmaceutical antihistamines or sleeping aids. Suppression of REM sleep is associated with psychotic disorders,23 and sleep deprivation for as few as three days can cause spontaneous periods of concrete hallucination and waking delusion.19 Mixing anticholinergics with REM suppression can create highly realized waking lucid dreams and experiences of leaving the body and entering into parallel realities.20 This indicates that periodic REM consolidation of eidetic memory over the course of 24 hours is necessary for maintaining stability of consciousness. Activating eidetic memory consolidation with the use of psychedelics and extended REM trance-induction may be therapeutic for subjects suffering from depression, anxiety, or psychosis due to PTSD, insomnia, and other stress-related sleep disorders. Conversely, using psychedelics as stimulants to avoid sleep may lead to negative plasticity and persistent psychotic disorders.15

[3] Content of eidetic psychedelic hallucinations taken from subjective reports and a survey of psychedelic literature.

[4] Accounts of eidetic hallucinations arising progressively and being wiped from visual memory by eye movements taken from subjective reports.

[12] Accounts of psychedelic eidetic images becoming more intense with eyes closed or in a darkened room taken from subjective reports.

[13] Subjective accounts of combining doses of both ketamine and LSD with pre-doses of 800mg of galantamine and 500mg choline report the eidetic visuals of these respective experiences as extremely intense, impossible to stop, and impossible to steer in a conscious direction. "Full-blown eyelid movie" was a telling snippet, and the fact that the images were not always pleasant and were impossible to control is another telling fact.

[18] Accounts of experimentation with plant and pharmaceutical anticholinergics taken from subjective reports and a survey of psychedelic literature.