Shamanism in the Age of Reason : Chapter 04

The fundamentals of hypnotic entrainment and induced trance states begin with the concepts of wave resonance and entrainment. Resonance is the quality of any oscillating system (waves in a neural network) to reach maximum amplitude (power) when stimulated with periodic drivers (pulses) at a specific frequency (pitch, or rhythm). The specific amplitude-driving frequency for any oscillator is known as the oscillators resonant frequency, and oscillators can have many resonant frequencies which top out at maximum amplitudes. If we envision the brain as an oscillator for maintaining stable consciousness, each band of consciousness in the spectrum must therefore have its own corresponding resonant frequency or frequencies which can drive spontaneous phase transitions into that standing wave state. The process of using resonant wave frequencies from one oscillator to drive the periodicity and amplitude of another oscillator is called entrainment, and when the shaman induces a trance state he is applying resonant wave interference to entrain the frequency of the patients neural oscillators.

All states of consciousness are created by the act of neurons firing in a network. When a single neuron fires once it is not a big event, but when a neuron fires in a rapid sequence then it is signaling other neurons with a fine vibration of wave spikes; these neural spikes are the language of consciousness. When two or more neurons fire at the same frequency they are said to be synchronized, and when two areas of the brain are firing in synchrony there is said to be coherence between these areas, which means they are most likely engaged in a complex distributed processing task. When neurons are coupled together in a recurrent network the rapid pulses sent back and forth between them are referred to as oscillations, and these oscillations take on the predictable mathematical properties of waves; a wave being any standing oscillation passing through a medium. These standing oscillations  literal waves of energy rippling through pathways in the cranial saltwater  are the field effect of consciousness flowing through the neural network. 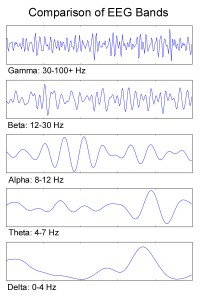 The oscillations of the brain can be measured via electroencephalography (EEG), a technique in which electrodes are placed on the skin and scalp to aggregate the voltage of the energy waves produced along the outermost cortical layers of the brain. EEG machines produce graphs of brain activity over time, (Fig. 1) and each state of consciousness occupies its own distinct space along the brain wave spectrum.1 The normal waking consciousness we perceive as active self is a beta state which begins right around 12 Hz, or 12 cycles-per-second; this is the speed at which consciousness updates in a focused, active state. In highly focused or intense waking states these beta rhythms can be pushed up to around 38 Hz, which means the neural network would be cycling information at a rate of thirty-eight frames-per-second (FPS).

Below beta is the alpha state in the 7-12 Hz range, which is associated with detached critical analysis and more relaxed physical intuition. Even more relaxed than alpha is the theta state between 4-7 Hz; this band makes up the transitional states between waking and sleeping, including meditative and lucid dream states. The waking mind finally shuts down at the delta range of 0.5 to 4 Hz, where the brain slows into the deep rhythms of regenerative sleep. This brain wave spectrum from 0.5 to 38 Hz is where we spend all of our days every day, with global brain cohesion rarely tipping over into the high gamma range of 40 Hz and beyond, bands associated with fast personal awareness and highly focused connective insight. But even higher than gamma is the hypergamma range, which is over 100 Hz; and above that is the mythical lambda state, over 200 Hz, where it is rumored that human consciousness tops out at total awareness of all things from the beginning of time to the end of history. On the other end, even lower than deep delta sleep, is the mythical epsilon state where brain waves drop below 0.5 Hz and a yogic state of suspended animation occurs.

When evaluating brainwaves human consciousness appears to be somewhat like a musical instrument than can be tuned and tweaked along a predictable spectrum of possible tones and chords. The brain wave spectrum as detailed here is only the most basic information, but EEG and brain wave science is rich with detail on how the various states interact with one another. For instance, there is evidence that slow wave oscillators in the brainstem may act as the circadian drumbeat of all consciousness; that fast gamma waves are employed spontaneously to bind coherence between slower brain areas; that slow epsilon waves may drive amplitude in the hypergamma and lambda ranges; that there are specific brain organs and hormones responsible for attenuating specific pulse ranges and keeping the brain in constant synch; that beta states promote anxiety; that the brain constantly produces many simultaneous bands of activity at differing power ranges in any state of consciousness; and so on

Most shamanic work is done in what is known as a trance state; a highly relaxed state of extremely narrowed focus. The traditional shamanic trance state is in the theta range, around 4-7 Hz, which is a meditative state in the boundary zone between sleeping and waking. Most shamanic drum circles drop naturally into the theta range, and this is the same range a hypnotherapist will drop you into when inducing a highly relaxed state. This range is also associated with day-dreaming, memory recall, and guided visualization. The high end of the theta band is associated with internal focus, visualization, and sustained concentration; the lower end is associated with more transient states of spontaneous memory recall and lucid dreaming. Somewhere in the lower end of this zone is the hypnagogic grey area between waking and sleeping where body-consciousness disappears and the user feels floating sensations and may have out-of-body experiences (OBEs).

One of the ways a shaman achieves a trance state is through hypnosis. A typical hypnotherapy routine will guide the patient slowly down through a relaxed alpha state and gently place them right on the borderline of the hypnagogic theta state. With the patient teetering on the edge of hypnagogia the therapist can then either engage them casually in a minimally aware alpha state or conversely tip them into an internal theta state where it is easier to imprint new suggestions onto existing memory structures. If the hypnotherapist wants to make an especially strong imprint he will introduce a suggestion in an receptive alpha state, then drop the patient to low theta range in order to process the suggestion, then bring them back up to alpha to reinforce the suggestion, and then finally send them back down to low theta or slow delta sleep for further deep associative imprinting. This basic routine is meant to focus the patient into the disengaged trance where rational override is shut down and the brain is vulnerable to suggestive memory imprinting. Most modern hypnotherapy focuses on behavioral imprinting, but the hypnotherapist may also uncover lost memories, imprint new memories, suggest the patient is floating, or take the patient on a guided visualization through a dream world.

Hypnotherapy contains many of the same elements of shamanism but hypnotherapy does not work for everyone. In shamanic therapy the psychedelic agent is applied to destabilize top-down control and make the patient more susceptible to entrainment for longer periods of time. If the patient is lying down with their eyes closed then psychedelics will produce a trance state fairly reliably on their own; the shaman does not need to do much more than measure an accurate dose and provide a safe place for quiet reflection. But aside from treating patients the shaman also leads group bonding rituals, and these group rituals utilize similar hypnotic entrainment technologies.

Typical shamanic entrainment technology may include drums, chants, music, strobe lights, chimes, audio pulses, and talk routines which guide the ritual participants into a shared trance. Native American peyote rituals use the beat of a medicine drum as the synchronous driver for the baseline trance, and then layer that with vocal drones to create resonant drivers which maximize brain wave amplitude and global coherence in the group circuit. Discussion of periodic resonant oscillators and entrainment is essentially a physics-based deconstruction of musics power to induce and lock targeted mind states, which is something we all instinctively understand from the experience of listening to music. However, when you look at this dynamic from a physical standpoint, when the mind is entranced by an entrainment technology such as music, the mind and the music merge from separate individual oscillators into a standing harmonic interference pattern with its own unique properties. The mathematical implication of this is interesting enough, but the physical implication is more intriguing; music and mind spontaneously couple.

In traditional Amazonian ayahuasca ceremonies, the ayahuascero may be blessed with an icaro, or a sacred song which is delivered spontaneously into his brain by the spirits. When the shaman sings this sacred song the ritual participants are quickly ushered into the sacred space along with the shaman. Using the entrainment dynamic it is reasonable to assume to that these icaros are feedback vocalizations tuned to the resonant frequency of the specific trance state occupied by the shaman. The shaman hears the resonant frequencies in his head as hallucinogenic artifacts of the phase transitions happening within his neural oscillators, and when he vocalizes these noises they come out as pitched micro-tones, often with layered multi-tonal vibratos coming from the nose and throat. By layering resonant multi-tones into the sacred song the shaman increases the amplitude and entrainment power of his neural and vocal oscillators. If the shaman and the ritual participants all sing the same tones together, their oscillators all merge into a constructive interference pattern and drive each other into a higher amplitude of shared energy. This is the physics of neural entrainment and linking group mind.