What Geometric Visual Hallucinations Tell Us about the Visual Cortex 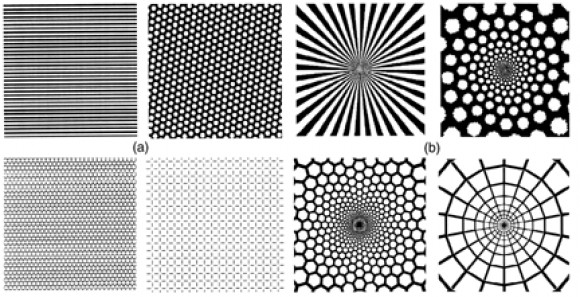 Many observers see geometric visual hallucinations after taking hallucinogens such as LSD, cannabis, mescaline or psilocybin; on viewing bright ickering lights; on waking up or falling asleep; in near-death experiences; and in many other syndromes. Kl ¨ uver organized the images into four groups called form constants: (I) tunnels and funnels, (II) spirals, (III) lattices, including honeycombs and triangles, and (IV) cobwebs. In most cases, the images are seen in both eyes and move with them. We interpret this to mean that they are generated in the brain. Here, we summarize a theory of their origin in visual cortex (area V1), based on the assumption that the form of the retinocortical map and the architecture of V1 determine their geometry. (A much longer and more detailed mathematical version has been published in Philosophical Transactions of the Royal Society B, 356 [2001].) We model V1 as the continuum limit of a lattice of interconnected hypercolumns, each comprising a number of interconnected iso-orientation columns. Based on anatomical evidence, we assume that the lateral con- Neural Computation 14, 473491 (2002) °c 2002 Massachusetts Institute of Technology 474 P. C. Bressloff et al. nectivity between hypercolumns exhibits symmetries, rendering it invariant under the action of the Euclidean group E(2), composed of re- ections and translations in the plane, and a (novel) shift-twist action. Using this symmetry, we show that the various patterns of activity that spontaneously emergewhen V1s spatially uniformresting state becomes unstable correspond to the form constants when transformed to the visual .eld using the retino-cortical map. The results are sensitive to the detailed speci.cation of the lateral connectivity and suggest that the cortical mechanisms that generate geometric visual hallucinations are closely related to those used to process edges, contours, surfaces, and textures.